June 2015 - As I write this, we’re less than 40 days from another EAA AirVenture Oshkosh fly-in. As you read this, it’s just over a month away. You may remember my comment on the fact that OSH and KOSH were coincidentally the FAA and ICAO identifiers of the airport, and when put together they complete the name of the city. Being a bit of a word geek, that still fascinates me! A completely useless factoid that might be of interest to one or two readers is that Osh is a city in Kyrgyzstan.

I won’t irritate you by repeating all the messages you have probably received about Oshkosh, but it promises to be a really fascinating show, with a full week of activity. Many of us usually plan which days to be there, but it looks like this year will be one in which it would make sense to be there for the whole week. The Airbus 350 extra-wide body, for example, will do flying displays on arrival on Monday and departure on Wednesday during the air shows, and the B-52 Stratofortress will be there the whole week. The Burt Rutan legacy celebration will be on Tuesday, and there are night air shows on both Wednesday and Saturday, and lots more.

The fascination with flying cars has interested not only the pilots among us but the general public at large, too. It was sad to see news of the crash of the Slovakian AeroMobil during a test flight; but at least the parachute system was deployed and there were no serious injuries. 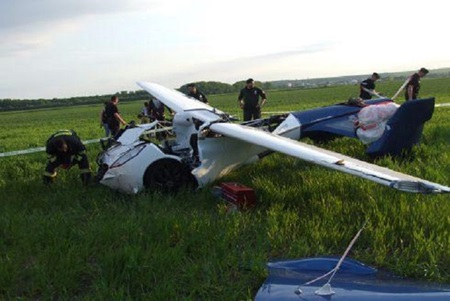 We received the following information from Chris Falconar at Falconar Avia regarding the Albertan Jodel D9 we featured in our “From the Archives” section in April.

“When Dr. Pearce first ordered the plans, he decided he would use a Continental A-65. I said, ‘Wait, wait!’ You need a stronger airframe for that engine. The Jodel D9 was designed for a 30-hp VW. Other builders were wanting to use Continental engines up to 100 hp. So we set to work designing the F10. It had 3/4-inch x 3/4-inch longerons in the fuselage instead of 5/8 x 5/8 (15 millimeters square), beefed main spar, bigger rudder, and numerous other changes recommended by North American amateur plans builders. Even though C-RFK got registered as a Jodel D9, it was actually the prototype F10. Many other F10s have been built, the latest having been completed and flown in Michigan last year by Paul Johnston.

“To say that RFK has a straight wing (no dihedral) is not true. It actually has about half the tip dihedral of the original Jodel D9. It is the Jurca Tempete and Jurca Sirocco that have a wing with no dihedral.

“RFK now resides in ‘the barn’ at the Reynolds Alberta Museum in Wetaskiwin, Alberta. Sadly, it is disassembled, sitting forlornly in the upper mezzanine. It was donated by Dr. Pearce’s son, Terry, to the museum. It could be assembled and still go flying.

“See our website for more pics and info.” – Chris Falconar

Thanks for the update, Chris!

In the same April issue, we also featured an article by Natalie Crawshaw regarding her TeenFlight group in Campbell River, British Columbia. She wanted me to let everyone know about an opportunity on July 11 at Campbell River Airport, British Columbia (CYBL). The group is having a Wings and Wheels event and hope those in the area will show up and support the meeting. It is free to spectators. Here is a poster with more details. Any pilots interested in flying in should contact Bill Alder at Sealand Aviation before July 11 at 250-287-6259 or via e-mail.

Aircraft homebuilders might be happy to know that ULPower has announced complete firewall-forward solutions for kit aircraft, where they may not already exist. Their first offering will be a six-cylinder engine option for an RV-4, and the producer, Kaolin Aviation, is expecting to produce others. You can find more information at www.ULPower.com. Not having to design and weld an engine mount is a distinct advantage if you want the engine but don’t have the welding wherewithal.

I often comment that we’re always on the lookout for newsletter content. I’ve met several interesting people recently with fascinating stories to tell, projects to show, and other contributions that would fit well here. I encourage you to simply send me an e-mail with some images and text and we can take it from there. Let this be the year that you say to yourself, “Darn it – I’m going to submit an article to Bits and Pieces.”