Eastern Townships Airshow Is on Again!

July 2017 - It’s been two years since the last Eastern Townships Airshow was held in Bromont, Quebec, and the next one will be held September 15-17, 2017. Air shows are a great way to promote aviation to the citizens near an airport and to the municipalities that need to be convinced of the benefits of supporting them. You may find some ideas of interest here for use in your area, in the approach that has been taken with this event.

Instead of just putting on an air show, the event is used to promote employment and training in aeronautics in the Bromont, Granby, and Cowansville municipalities, which financially support the airport. An evening cocktail event was held to launch and promote the air show and fair, with local dignitaries and the press in attendance. 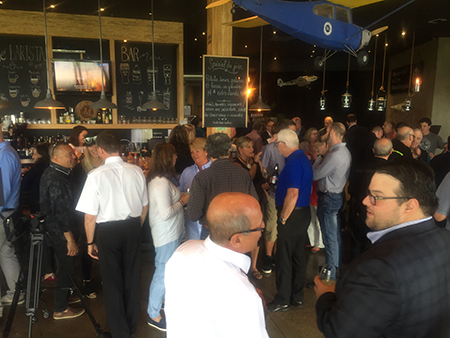 As well as selecting an honorary president, Normand Brathwaite, who is a well-known entertainment figure, an honorary junior president was selected from the local Air Cadet squadron. He is a young sergeant named Nathan Martin, and he’s clearly headed for a career in aviation.

Normand cheerfully said, “I’m not a pilot; I’d hate to fly. I’m usually relaxing in the back seat, but my wife is a helicopter pilot, and I’m delighted to have been nominated to help support this event.”

Nathan, on the other hand, said, “It was at the 2014 air show here that I was inspired to decide I want to be a pilot. I was forced to wait impatiently until I became 12 years old to be able to join Air Cadets.”

At least 40,000 visitors are expected to attend during the weekend’s events, which will include the Canadian Snowbirds, Manfred Radius’ beautiful soaring to classical music, YakAttack, and many more yet to be announced performers. There will be opportunities to meet some of the performers and see several aircraft on display.

The organization has already opened its website to recruit volunteers, without whom an event of this size would be impossible.

Why not tell us about some of the ideas you have noticed in your own area to promote aviation and your local airport?