Nieuports over Parliament – Prevented by Weather

July 2017 - During the preparations leading up to the April 9 Vimy flypast, the event was expected to include four Nieuport II biplanes and two Sopwith Pups built by the Canadian Museum of Flight (CMF) in Langley, British Columbia. Unfortunately, the two Pups did not have enough flying hours to be allowed to fly in France, but they did go over as statics. One was at the Lens airport where Vimy Flight was based, and the other was displayed at the Artois Expo in Arras where more than 10,000 students, teachers, and dignitaries came through.

In the absence of the Pups flying, the CMF provided its SE5 to make a five-ship formation in France. So, the four Nieuport IIs and the SE5 were the biplanes that flew over the Vimy Memorial on April 9.

Now we are back in Canada, and the Nieuport II biplanes are well into the Birth of a Nation tour. You can follow them on Facebook, and we even have trackers in the biplanes now, so you can follow their journey in the sky as well. 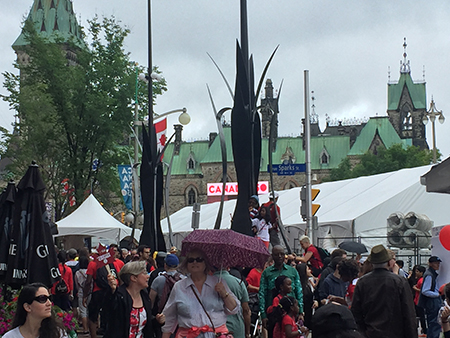 Crowds gather in the rain to celebrate Canada’s 150th.

The three CMF birds (two Sopwith Pups plus the SE5) have been transported back to British Columbia from Greenwood by the Royal Canadian Air Force, and they will start their tour of British Columbia — including the Abbotsford International Airshow.

You can find more of their schedule on this website: Canadian Museum of Flight.

Editor’s note: Unfortunately, after having invested weeks in the planning of a Canada Day 150 flypast over the Houses of Parliament, the weather prevented it from happening. Neither the Nieuports nor the Snowbirds managed to fly that day, but the CF-18 with its celebratory paint job did manage to fly a single pass over the hundreds of thousands of damp onlookers on the streets of Ottawa. You can read more online about the team members of the Vimy Flight, including Larry Ricker, and see some great videos.