August 2016 - There are probably more than a few pilots out there who worked hard to get that pilot certificate years ago with romantic visions of travelling to exotic, far-off places. Then reality sets in and you find yourself enjoying mainly the local fly-ins, breakfasts, and barbecues. I enjoy those thoroughly, but I always have an itch to get out and see those mysterious distant places. So, with time on our hands and my enthusiastic wife Carrie as copilot, we have twice joined up with the Century Flight Club to do cross-Canada trips.

John Lovelace, of Wings Over Canada fame, started this annual adventure after the initial group flight to Baddeck for the Canadian Centennial of Flight. Now headed up by Jim Moffatt and a solid team of regional directors, Century Flight really takes the edge off cross-Canada flying. They do this by planning an itinerary, finding overnight locations with airports that can handle large groups, arranging fuel discounts, booking hotel blocks, and arranging for local shuttles to and from your plane. And that’s just to get you to the destination! Once there, plan to enjoy knowledgeable speakers, fly-outs to local attractions, and great conversations with other like-minded flyers.

In 2014, we were enticed by Century Flight’s program to fly from Peterborough, Ontario, to Nanaimo, British Columbia. For me, the main attraction was the offer of a mountain-flying course in Lethbridge before we ventured into the rocks. I understood that mountains and their surrounding weather deserve respect, and I wanted to learn from experienced pilots. The Nanaimo trip was a fantastic experience, not only for the mountain flying, but for that total package that comes with flying in an organized group.

Where they all came from >>

Now, in 2016, the Yukon beckoned—more mountain-flying opportunities, a visit to an area we had never explored, and the chance to experience the midnight sun, since the plans called for the club to be in Whitehorse for the summer solstice. We were also looking forward to reuniting with friends from the Nanaimo trip. That’s all it took! We signed up, made sure everything in the plane was current, certified, and ready to go. Then we launched westbound from our base at Stanhope in Haliburton.

The plan was straightforward—day one to Red Lake, Ontario, day two to Slave Lake, Alberta, day three to Fort St. John, British Columbia, then into Whitehorse, Yukon, on the fourth day. With all your stars aligning correctly or with good IFR equipment to compensate, the plan was quite achievable and many made it work for them. 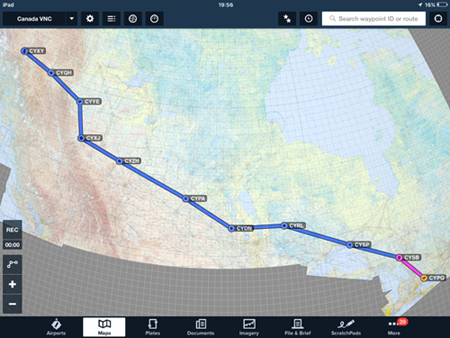 However, our vintage 1958 Cessna 172 is a pretty basic aircraft, and we’re both strictly VFR pilots. That means we cooperate with the weather we’re given and roll with the punches.

Our first day the weather briefing told us that Red Lake could have some deteriorating weather late in the day, so we launched early and made our fuel stops at Chapleau and Geraldton as brief as possible. I’ll admit to causing a short delay when we got a chance to talk to one of the Canadian Snowbirds air show pilots parked beside us at Geraldton. 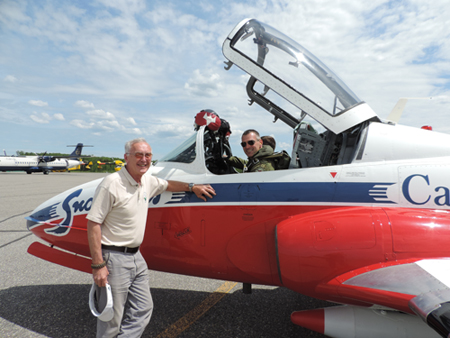 What pilot could resist this photo op?

Our really big surprise for the day was tailwinds going west! Clear skies kept us company until we approached Red Lake. About an hour out of Red Lake we descended to 3,000 feet to stay clear of clouds. Except for isolated showers, the weather at arrival was actually easy VFR. We fuelled up on arrival, caught the shuttle to the hotel, then enjoyed dinner with the other Century Flight members——not a bad start!

The plan for day two was confounded by a convective weather system moving across our intended path. Four of us decided to fly to The Pas, Manitoba, to make some distance, then let the system move through overnight so that we could fly in the clear air behind it the next day. Carrie and I decided to fly as far away from the weather as possible by heading up the east side of Lake Winnipeg to Norway House then over to The Pas. That worked for us, cruising at 6,500 feet with tailwinds again! Since The Pas stop wasn’t on the Century Flight itinerary, we had to arrange a hotel for four couples and transportation, a little difficult with two big events happening in town. The hotel we found not only shuttled us from the airport (a 20-minute ride), they treated each of us to a beer and fresh baked cookies and shuttled us back in the morning. That’s hospitality! Although it had been calm when we tied down, the overnight weather must have been interesting as our plane had weather-vaned 90 degrees from where we left it, dragging two pails of concrete with it! Fortunately, no damage occurred but I can assure you that the tail got tied down every night after this incident.

Weather forced us to head for Prince Albert next, then we diverted southwest to Bonnyville to stay out of Cold Lake airspace where military exercise “Maple Flag” was underway. We spent several hours in Prince Albert waiting for a storm to leave the Bonnyville area, all the while keeping a watchful eye on a different system approaching Prince Albert. The timing worked out favourably for us, and we made Bonnyville…but against some serious headwinds that had us down to 70 knots groundspeed.

We were hoping to make Fort Nelson on the next day, but good old Canadian prairie summer weather didn’t agree with our plan. Peace River was achievable, however, so we headed there via Slave Lake, albeit with lower ceilings than we had been enjoying. This is when ForeFlight’s “hazard advisor” layer came in handy. We turned that on when rising terrain looked uncomfortably close to the cloud bases. It showed us a clear path around the hills with lots of safety margin. We made Peace River easily by noon and enjoyed the fundraising BBQ laid out in support of the Fort McMurray folks. The team at Northern Air was extremely helpful getting us tied down and even driving us to the hotel! Another delightful end to the day, and we were now within a day’s flight of Whitehorse!

With the possibility of making it to the club’s opening banquet on time, we decided to rise at 5 a.m. (daybreak comes early this far north) to try to beat the afternoon cumulus buildup. There was morning fog at our hotel, but everything was clear out at the airport, so we got the early start we wanted. After a fuel stop in Fort Nelson, we flew direct to Watson Lake, our last stop before Whitehorse. Watson Lake is a great little airport to stop for lunch, with lots of flying history on display. With clear weather forecasted, we decided to follow the Alaska Highway for the last leg into Whitehorse, rather than go direct over the mountains. These last two legs from Fort Nelson to Watson Lake and Whitehorse give you magnificent views of the Rockies. Flying at 8,500 feet on the posted VFR route over the highway will keep you safely clear of them.

On arrival to Whitehorse, with gusty winds at 180 mph, we opted for Runway 19 even though it’s only 1,800 feet. This airport sits on a plateau above the city, which results in the approach to 19 crossing a cliff on short final. That sure got my attention! I did a little steeper approach than normal since tower reported that downdrafts were a possibility at the cliff. 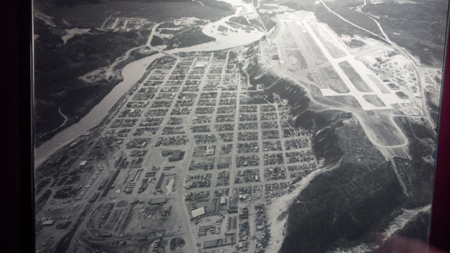 Vintage photo of Whitehorse with interesting approach to crosswind runway 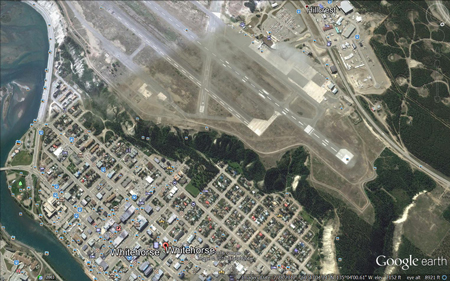 The fact that I’m writing this tells you all turned out well. After a long day of flying, we had a short taxi to the apron reserved for our club. We tied down securely and made it to the hotel in the late afternoon. We logged 2,400 nm in five days, and we achieved our goal to be at the opening banquet and catch all the activities!

Next month: A Week in the Yukon.