September 2017 - Like so many programs under the EAA banner, the IMC Club started with the idea of one man, Radek Wyrzkowski. A commercial pilot working on his ratings, Radek found himself one day with a newly minted IFR ticket on his very first venture into IFR territory. After takeoff and in clouds he suddenly realized he had no paper or pencil to copy any variation to the flight clearance he had filed. Suddenly he had the firm realization that an IFR rating doesn’t mean you are capable of IFR work. There’s a lot of learning still necessary.

Years later as a master CFI Radek would meet over coffee with other flight instructors and discuss scenarios they had experienced. Out of these conversations the idea of an IMC club was born. The mission was to help instrument pilots improve their proficiency by working through real-world IMC stories.

Founded in 2010, the IMC Club mentor program was later incorporated into EAA’s member benefit programs, and many EAA chapters have combined their activities with IMC Clubs.

In 2016 Radek expanded the program to include VMC scenarios using the same format of interested participants getting together in a social club setting to discuss and work through real-life VMC conditions. This format is designed to improve their pilot proficiency and decision-making ability with problems experienced in a real-case analysis. The concept is not to find absolute answers but to develop rational thinking in consultation with your peers.

In the following example you are the pilot – meaning this situation is real whether you are a newly minted IFR pilot or one with tons of experience. Picture yourself in this discussion and think about what action you would have taken.

The aircraft is a Piper Cherokee 180 with the equipment and instrumentation you are most familiar with. You are departing your home base at around 10 a.m. It is April and you plan a flight to practice some approaches in a nearby controlled airport. You filed “direct to” and the weather is overcast at 1,500 feet with winds from the north at 15 knots gusting to 25 knots. You filed your alternative airport, and you listen to the automated surface observing system (ASOS) before takeoff, and winds are now from 340 degrees at 14 knots gusting to 22 knots. There is another aircraft in the control pattern that reports a bumpy ride but otherwise fine. You announce departure without delay and hold right aileron wind correction and lift off. Suddenly a wind gust from the opposite direction abruptly sets your right wing to the ground, but with immediate correction you are still flying and climbing again. As you climb into clouds and are about to change frequency, you hear the aircraft in the traffic pattern reporting a “go-around” due to debris on the runway that “looks like an airplane gear.” What would you do?

As you discuss this challenge with your peers, you can introduce additional problems, such as “fuel seems to be low in the right tank,” or a “comm” failure that might be attributed to an antenna near the right gear. How about an avionics failure that puts you on partial panel?

You get the idea. The same concept applies to the VMC pilot. These programs are available free of charge to all EAA members through their chapters. The scenarios are professionally produced and offered to the EAA chapter in the form of a PowerPoint presentation. You simply meet, go through a “what-if” scenario, and then begin your discussion. 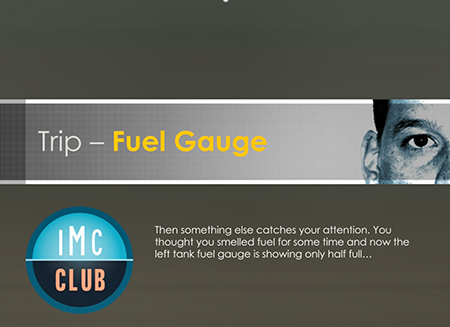 Through your EAA IMC/VMC Club, you will get insights into how to handle real flying situations, engage with pilots of all experience levels, share your knowledge and experience, support the education and safety of pilots everywhere, and participate in fellow-pilot assessments of your knowledge and skills. There are no right answers. The idea is that you learn from each other.

Once you have taken in one of these sessions you will be hooked. It’s fun, it’s real life, and it might save you or a fellow pilot’s life one day. This program is a sleeper but will have a major impact on flying safety.

For more information on how your chapter can get involved, contact IMC Program Manager Radek Wyrzkowski via e-mail or at 920-230-2661.