September 2017 - I’d always wanted to fly to Prince Edward Island (PEI). When my friends Doug and Carrie Martin invited me to a fly-in organized by Lee and Marilyn Arsenault, how could I resist? We became one of 32 aircraft and more than 70 attendees for a great week of fun discovering PEI from the air and on the ground.

As luck would have it, we shared the airport at Summerside with a C-130 Hercules, which was there for two weeks for some training exercises. Two of our number were selected as “targets” for one of their practice runs. You can read Harrie Jones’ excellent article about that experience, but I can’t resist these shots of yours truly in the left seat of a Herc and a sneaky shot of my bird parked next to the same aircraft for as long as it took to take the photo. 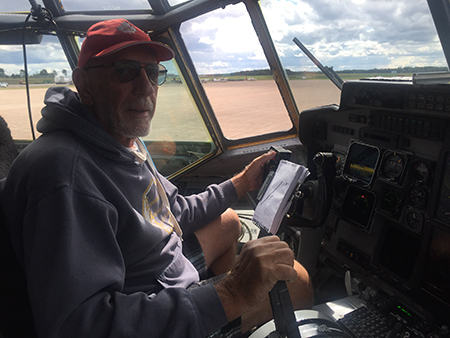 I know this will never happen again, so I had to get this shot. 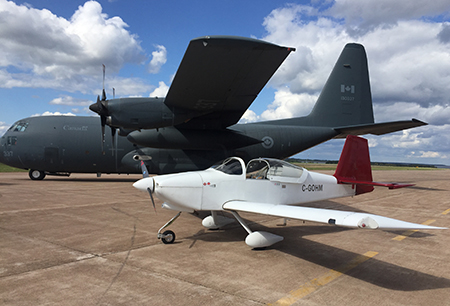 One engine and four!

Lee and Marilyn did an outstanding job of organization. They had set up a meet-and-greet in one of the hotel rooms where refreshments and munchies were on offer for the first several nights and when new aircraft arrived. On the Tuesday we had a very laid back nine-hole golf experience. The Wednesday evening entertainment was provided by an amazingly talented trio of Lee’s French Canadian cousins providing typical Maritimes folk music and dance, and on Thursday we flew out to a grass-strip airport at Cable Head Airpark (CCA3) for a picnic on the beach. The “short walk to the beach” turned out to be about a 5-kilometer hike, so the shuttle vehicles were really appreciated, especially on the return trip after we’d all feasted on the lunches we’d brought. One brave soul, our friend Carrie, did manage to impress us all with her swimming prowess in the waters of the Gulf of St. Lawrence, but a few other slightly less brave souls did at least get their toes wet.

Slemon Park Hotel and Conference Centre was our home for the week. The rooms were well-cared-for and comfortable even though they had that ex-military barracks feel to them, because that’s what they were. We were able to walk to our aircraft, which were closer to us than was the end of the 8,000-foot runway, which terminated at the shores of Malpeque Bay, famous for its oysters, herons, and cormorants.