October 10, 2018 — In editing this article, I was amazed to learn what a unique character Bill Lishman was. Not only did he not finish high school, but he was a leader of an organization against the creation of an airport at Pickering, Ontario. Raised by a Quaker mother, he was an artistic genius with a love of nature despite being dyslexic and colour blind. Bill died on December 30, 2017, at the age of 78, having been diagnosed with leukemia 10 days earlier. — Ed. 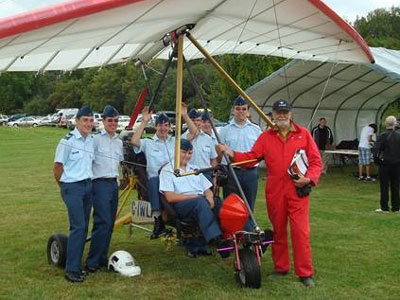 Canadian artist, inventor, and visionary Bill Lishman, EAA 110246, died as last year came to an end. He was affectionately known to many as Father Goose, a title he gained after leading geese on a migration run in 1988. He later became famous through the movie Fly Away Home. 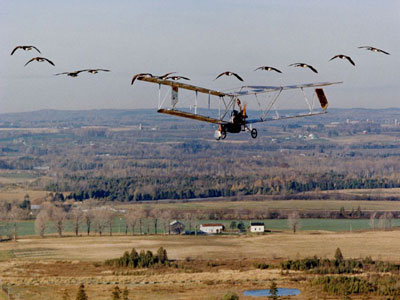 The photo that won the Canadian National Newspaper Award in 1988.

Few today know that Bill was an Air Cadet in 151 Chadburn Squadron. In fact, he and I were Air Cadets together back in 1951. He was in the cadet program for approximately a year, but his creative spirit and imagination didn’t mesh with the limits of a cadet program. However, our personal friendship continued over the years, and one summer Bill and I visited an Air Cadet summer camp where he spoke to the cadets involved in one of the summer camp aviation courses. He was also a guest speaker at one of our mess dinners.

Few would know that Bill perhaps saved his own life and the lives of others with the knowledge that he gained as an Air Cadet. Bill related the story of how he and some friends decided to take a sailboat to the Caribbean. The group hired a skipper to supervise the trip, but they later found out that he had little or no knowledge of how to sail and navigate a ship. As a result, they found themselves lost in the Atlantic. Bill remembered from cadets how you could use a radio as a direction finder. Fortunately, he had with him a $3 pocket radio, which he used to get a bearing on a station in New York and another radio station to the south. His navigation plot showed that they were about one-and-a-half days from Bermuda, and that is where they apparently made their first stop.

If readers would like to see one of Bill’s early flights with geese check out this video.

You can read more about his life in the Globe and Mail obituary.