Fly In and Pick Your Own

We received this report of a fly-in at Stanstead, which is a grass strip in Quebec very close to the Vermont border. It is operated by the author, George Weller, and he has been active over the years in encouraging aviation in his area, including cross-border visits and a winter fly-in on Lake Memphremagog. As you will read, George and his family do a lot more than mow the runway. —Ed.

October 2017 - Our fly-in scheduled for Saturday, September 9, 2017, was disappointing. The weather was poor, so only one plane flew in and one amphibian from the United States did a flyover. Sunday was far better with 21 planes and a bunch of drive-ins.

We probably served about 90 meals with our organically grown fresh garden produce and corn, and all enjoyed the event, especially Sunday, the second day.

We have a you-pick garden with most veggies, including our own really tasty yellowish potato, which we have grown for about 25 years. We also have an orchard with disease-resistant apples and pears that do not need spray except for bugs, and for them I use Surround (a micro-fine clay that bothers the bugs), apple maggot fly lure, and sticky traps. Of course, we still have Beefalo meat for sale especially in the fall, and a small bed and breakfast.

View down the runway — quite the crosswind!

We have, perhaps, the only fly-in you-pick operation around. People can drive in or fly in and pick what they want, weigh it, and leave their money in a container according to the price list. Several have flown in so far, and some have come multiple times. It is very convenient and may beat the $100 hamburger concept. Everyone enjoys the views and ambiance. Of course, everyone flies at his or her own risk.

In all, 21 aircraft of all sizes flew in. 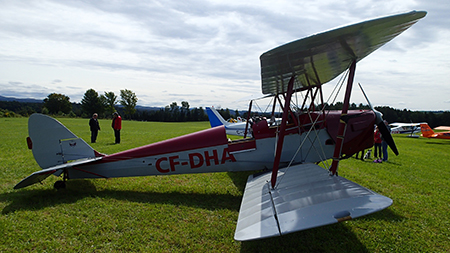 We also have golden retriever pups for sale often, and trout ponds to fish. We are building a cabin that people can fly in and rent. It will probably be ready next year.

The small woods and ridge on the southeast side of the runway have been removed and the dirt now extends past the runway further south. Although made as a field, it looks like and could be a parallel runway. Having your own bulldozer and road grader helps a lot.

Fly in some time. Check out CTQ2 in the Canada Flight Supplement.