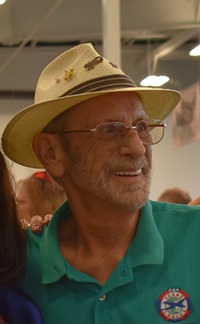 October 2017 - On Wednesday, September 20, the Langley Aviation Council (LAC) met for the first time after the summer break. The meeting was held in the local air cadet building at the Langley Regional Airport (CYNJ), and the topics of discussion included an update on the many construction projects currently underway. However, the item of most interest to the local EAA members was the presentation of Werner Griesbeck’s EAA Lifetime Contribution Award. This award was previously presented at the EAA Canada breakfast at EAA AirVenture Oshkosh 2017, but Werner was unable to attend due to health issues, so the in-person presentation was rescheduled.

What follows is a condensed transcript of the presentation:

Each year, EAA presents a Lifetime Contribution Award to a deserving member for his or her contribution to aviation in Canada. The recipient must have demonstrated, over a significant period of time, his or her dedication to the promotion of aviation in Canada, especially related to aircraft construction or restoration. I am honoured to present the 2017 EAA Lifetime Contribution Award to a longtime member of the Langley Aviation Council.

This year’s nominee has an extensive and impressive background in aviation.

He has been a baker, a flight instructor, an air traffic controller, an antique aircraft restorer, and, lately, a hot-rod builder. He is a man of many talents and is always willing to share his knowledge and time with anyone showing an interest. Who else could I be referring to other than Werner Griesbeck?

Werner was born in Bavaria in southern Germany in 1943 and moved to Canada with his parents in the early ’50s, eventually arriving in Mission, British Columbia, where his father started a bakery.

He worked for his father in the bakery, pulling the early shift — 3 a.m. until whenever — earning the money that went to flying lessons in 1964 at Abbotsford.

He worked as a flying instructor from 1966 to 1970, which included a stint running a remote school in Powell River. Later, in 1970, he joined Transport Canada and worked in ATC initially in Abbotsford, then in Langley, and then back to Abbotsford until he retired in 2000.

His passion for flying has included the mechanical side, completing restorations of five J-3 Cubs as well as a Porterfield in ’81 and a Fairchild in ’91. He obtained his airframe certificate in the 1980s, allowing him then to do annuals and sign out his own work.

He and Dan Holliday together built a Marquart Charger, and he assisted in the construction on Dan’s Piper. He played a major role in the completion of Jim Britton’s Staggerwing — twice! He somehow found time to help me with my Stinson in painting and in an engine change as well as many annuals.

He gave many area pilots their tailwheel checkouts, including yours truly, insisting on only three-point landings and laughing madly when things went a bit sideways.

He has been a director of the Canadian Museum of Flight here in Langley and, for a period, applied his expertise in both maintenance and flying to the Waco Cabin, Fleet Finch, and Tiger Moth. The Abbotsford International Airshow also saw him participate in many flypasts, either in one of his own classics or in one of the museum’s biplanes. The Arlington Fly-In air show also benefited from his expertise as a judge in both the antique and classic classes.

His skills are acknowledged by many all over the Pacific Northwest. It is impossible to go anywhere with him and not meet some of his many friends and associates. Last year, for example, at Paine Field we ran into a fellow Fairchild 24 restorer and air race pilot John Penney, who flies a MIG 29 Fulcrum for Paul Allen in his spare time. Then there was John Sessions, owner of the Historic Flight Foundation, who had questions on how to sort out his own Staggerwing, knowing that Werner has been instrumental in the restoration of Jim Britton’s Staggerwing.

He was an early supporter of the EAA Young Eagles program and helped organize first flights for some 700 kids here at Langley, personally flying more than 100 kids during our time with that program.

A few of us were talking about some of this a few days ago and wondered how he found the time. Nonetheless, he made the time for not only this but many other related activities. And that is why we are here tonight. To acknowledge someone who has dedicated his life to friends, family, and aviation in Canada.