November 2016 - My home field is Langley, British Columbia (CYNJ), and the weather for Friday morning, September 2, 2016, was below VFR with low ceilings and showers with the threat of thunder storms during the day. A typical West Coast forecast that usually shows up when you have planned to fly somewhere interesting. In this case, to Paine Field in Everett Washington, just down the road from Vancouver, British Columbia. There, we planned to visit John Session’s Historic Flight museum where he was hosting a Vintage Aircraft Weekend featuring antique and classic aircraft from all over the Pacific Northwest. However, since this wasn’t our first rodeo, we had flight planned a late morning takeoff and only had to change it once to early afternoon.

The plane, a 1938 Fairchild 24 K restored and flown by Werner Griesbeck, was fueled and packed the previous day, so once the weather had improved, it was just a matter of filing a flight plan and going. 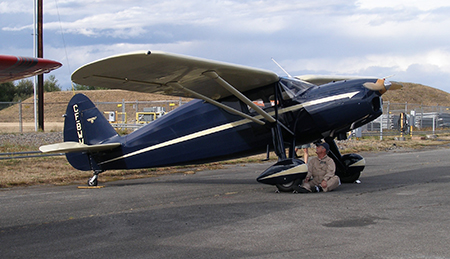 Clearing U.S. customs in Bellingham (KBLI) was quick and painless, having had all our ducks in a row with the Electronic Advance Passenger Information System (eAPIS) manifest filed and the mandatory call ahead to confirm arrival times.

Paine Field (KPAE) is about 45 minutes south of Bellingham and is home to John’s museum, Paul Allen’s Flying Heritage collection, and, oh yes, Boeing’s plant where they assemble the 747, 777, and the 787 — lots of stuff for even the most jaded aviation enthusiast.

The weather stayed clear for the flight down to Paine, but with a line of thunder storms just south of the field to add interest to the afternoon. After checking in to our hotel, the museum’s shuttle took us back to the field where we had dinner and then spent the evening enjoying a band whose sound was reminiscent of the 1940s. 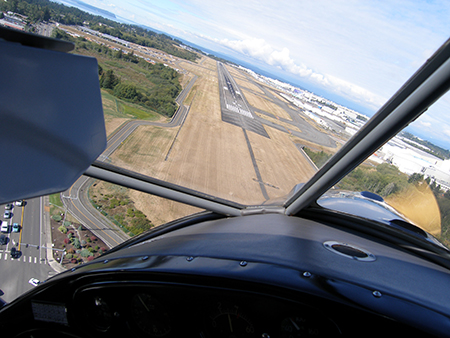 Saturday morning dawned below VFR with fog and light rain, but as a pilot briefing was to be held at 8 a.m., this necessitated an early breakfast in order to catch the 7:30 shuttle.

The weather lifted around noon and flying commenced with Spitfires and a Hurricane supplemented by P-51s. Later in the day, the pattern was filled with a variety of civilian and ex-military aircraft: a DC-3, our Fairchild, C-195s, an Avenger, Zero (replica), the Pearl Harbor Interstate Cadet (see Sport Aviation July 2016), Heritage’s B-25, a Beech Staggerwing, T-6s, and others. 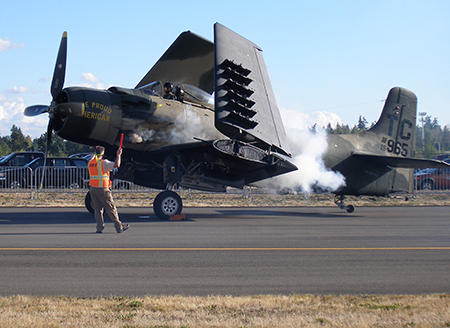 Perhaps even more interesting were some of the people we met. John Sessions, of course, but others like Bud and Ross Granley of Granley Family Airshows; Bill and Carol Lamberton, owners of a Tutor jet trainer obtained in a trade with CFB Comox for a Vampire; and John Penney, air race pilot extraordinaire and a restorer of a Fairchild 24. All of these were charming and down-to-earth good company. Also present were Jim Reith, president of the Abbotsford International Air Show and his wife Maggie. Jim is a former Snowbird, airline pilot, and the current owner of a Globe Swift. 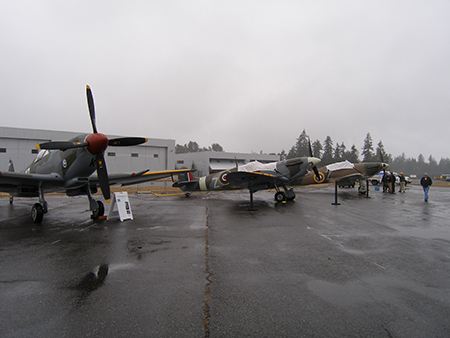 Spitfires and a Hurricane in the rain

Sunday dawned foggy, but as we hadn’t planned on heading home until late in the day, it was a good time to do the Boeing tour and also visit the Paul Allen collection.

It appears that the 747 production may be winding down as only two of the four stations were filled. But, at the other end of this giant plant, 777s and 787s filled the building. As it was a Sunday, very few workers were in the plant. Midweek would likely be a more interesting time for this tour.

After trying to figure out a way to get across the field to the Flying Heritage Collection, Bud Granley suggested the obvious solution, taxi across. No sooner said than done.

This is another incredible museum with most of the aircraft on display being flown regularly. According our guide, the only aircraft that the pilots fight over (to fly, that is) is the Fieseler Storch, the slowest aircraft in the collection. The collection also includes several one-of-a kind aircraft including a FW 190D13 Dora and a Polikarpov I-16 Rata. On the other end of the scale, there is the MiG-29UB Fulcrum trainer obtained in the Ukraine and a replica of SpaceShipOne and the original Model 318 White Knight carrier aircraft built by Scaled Composites in Mojave, California. Other exotic aircraft in the collection are held in hangars around the Northwest and are rotated in from time to time.

Finally, it was time to head home. The weather was clear, the flight plan was filed, Canadian Passenger Accelerated Service System was called, and an hour later we were home.