November 2015 - Fans of the TV show Ice Pilots will be pleased to note that the series is back on TV this month with a new season. Broadcast on the History Channel, it brings us more adventures with these classic radial-engined aircraft and the business of operating them in the frozen north. It was really sad, therefore, to hear that one of their two C-46s, C-GTXW, landed gear-up at Deline Airport and skidded 700 feet past the end of the runway.

Of course, the best news is that nobody was hurt, and apparently the decision to leave the gear up was to assure that they’d actually make the airport by conserving lift. It seems to have been the right choice, especially with a 300-foot ceiling. It’s probably too early to say if the aircraft can be rebuilt, but early reports were that it was a write-off. It would make quite a parts kit for the remaining aircraft. 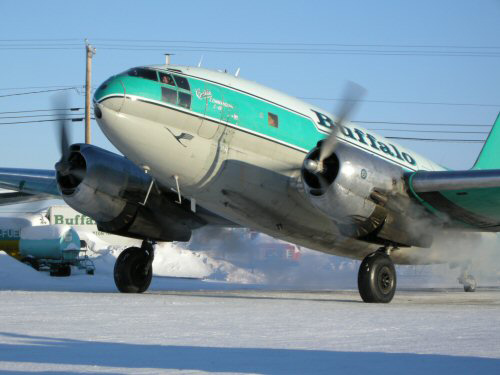 One of the Buffalo Airways C-46s

UPDATE: TSB#A15W0149: The Buffalo Airways Curtiss C46A-45CU (C-GTXW) was operating as flight BFL525 from Yellowknife, Northwest Territories (CYZF) to Norman Wells, Northwest Territories (CYVQ). While en route, approximately 140 nautical miles southeast of CYVQ at 6,500 feet above sea level (ASL), the crew noticed a drop in the right engine oil quantity indicator in conjunction with a propeller overspeed. The propeller pitch was adjusted to control the overspeed however, oil quantity indication continued to drop rapidly. A visual confirmation of the right engine nacelle confirmed that oil was escaping via the engine breather vent at an abnormally high rate. The right propeller speed became uncontrollable and the crew completed the “Prop overspeed drill.” However, the propeller (Hamilton Standard, 23E50-505) did not feather as selected. Several additional attempts were made to feather the propeller before it eventually feathered. The engine (Pratt & Whitney-USA, R-2800-51M3) was secured and the shutdown checklist completed. The crew elected to divert to Tulita, Northwest Territories (CZFN), but quickly determined that the descent rate would not permit that as an option. The only other option for diversion was Deline, Northwest Territories (CYWJ) where weather was reported at half-mile visibility and 300 feet ceiling. An emergency was declared with Deline radio. BFL525 was able to land at CYWJ however, the landing gear was not selected down to prevent further loss of airspeed resulting in a belly landing approximately midpoint of Runway 08. The aircraft continued off the end of the runway coming to a stop approximately 700 feet beyond the threshold. The crew evacuated the aircraft sustaining no injuries however, the aircraft was destroyed. Buffalo Airways’ initial investigation revealed the engine oil scavenge pump had failed.

By the way, I just found that my local TV company has the first four Ice Pilot episodes on their low-resolution History Channel only! Hopefully they’ll play them at the higher resolution at a future date. Apparently I don’t have the low-res channel in my package! Doesn’t that just take the biscuit?