November 2015 - We received a request to fly to Sept-Iles, Quebec, to rescue 18 dogs! That’s a long way and a lot of dogs. Just to refresh your Canadian geography lessons, if you don’t recall where Sept-Iles is, it’s way the heck at the end of the St. Lawrence Seaway on the north side, where the distance between north and south shores is 112 km. The Society for the Prevention of Cruelty to Animals (SPCA) in Sept-Iles was full to the brim and unable to accept any new dogs, which meant that any dogs arriving would probably have to be euthanized at a veterinary office. A few of the dogs were younger and smaller, but the majority of them were older big mixed-breed dogs, which do not get adopted quite so easily.

The weather looked uncertain, but we decided to give it a go. I learned something! There is an excellent fit between Pilots N Paws and flight schools. The majority of the volunteers for this flight came from the local flight school, all trying to build hours in singles and twins towards advanced certification while hoping to do a good turn for man’s best friend.

Since I’d just completed my annual and didn’t want to do such a long trip solo, I volunteered to copilot with Alain Pepin in his Cessna 172. 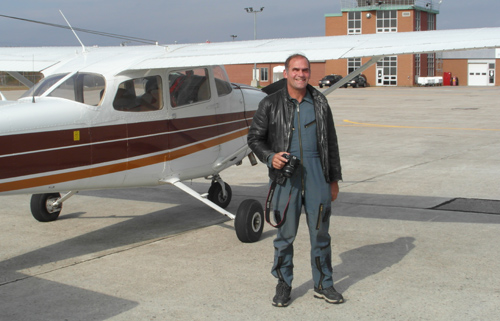 My RV-9A could accommodate a large dog or a copilot but not both. The baggage area, without removing the passenger seat, would have been very cramped for a big dog. We took off in decent weather but with reports of low ceilings and mist at the destination. Arriving half way at Riviere-du-Loup for a fuel stop, we checked in again with weather and with a twin that had gone on ahead. The weather was still bad at the destination, but we decided to continue on to Baie-Comeau in the hope that the weather would clear. 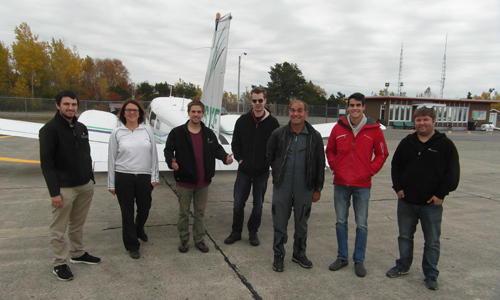 Pilots pause for a pose for Paws.

Arriving at this airport on the relatively barren north coast of the St. Lawrence River, we fueled up in beautiful weather and clear skies and checked in with the other pilots who were all waiting to find out if the weather would clear an hour’s flight away at Sept-Iles. 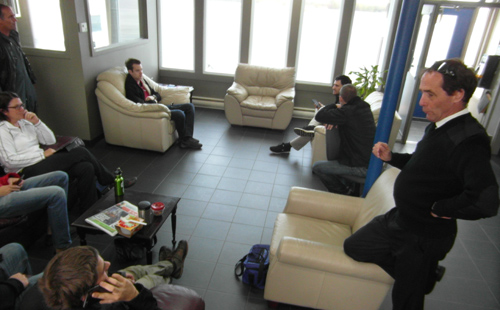 We suggested that the twin could possibly fly-in IFR and bring some of the dogs from Sept-Iles to Baie-Comeau.

Send in the twin.

A land vehicle was out of the question since it was still a three-hour drive between locations and it was already midafternoon. The twin made an attempt and reported having to abort at 700 feet above the runway without having been able to see it. The ceilings at the time were 300 feet and they never improved.

Disappointed, and feeling sad for the dogs, we all headed home, this time stopping at Quebec City’s Jean-Lesage International Airport for fuel. Since this trip was in early October, the views along the St. Laurence were spectacular. 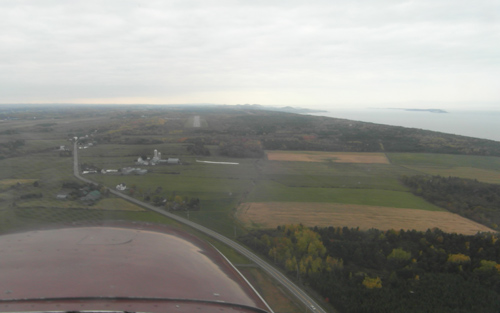 Passing just south of Drummondville we were aggressively pursued by a green laser. I don’t mean one of those wimpy things that someone might use to highlight a presentation. This was like nothing I’ve seen, as though someone had a Star Wars lightsaber. We were dazzled and distracted for at least 10 minutes and probably 20. It was amazing to see how far he was able to track us, although in retrospect the nav lights probably helped him find us.

Anyway, we landed without incident in Bromont, and Alain continued on to his home base in St-Jean sur Richelieu. It was a disappointment not to have gotten any dogs transferred to other SPCAs, but at least we tried.

If any readers are presently in a flight school, either as a student or instructor, why not take the opportunity of ferrying a dog to its new home while you are building your hours, and maybe get a charitable donation receipt in the bargain. Our fuel cost for our failed mission was about $600 (yes, just for the 172), so it’s a lot to pay out of pocket. If you’re investing for hours anyway, why not save a life into the bargain?

Many thanks do to the pilots and handlers who participated:

Philippe Pare, Diane Proulx, Guillaume Legris, Ugo Derouet, Robert Jodoin, Alain Pepin, and Joel Alvarez and to Marc-Andre Beaulieu for coordinating the attempt. Apologies in advance to anyone I missed or whose name I misspelled.