December 2016 - Each summer season I try to get to at least one fly-in somewhere interesting. Here on the West Coast there are a number of options for us, all within a few hours from home. One of those is hosted by the Western Antique Aircraft and Automobile Museum (WAAAM) in Hood River, Oregon. What follows is how I saw their 2015 event and the trip home. 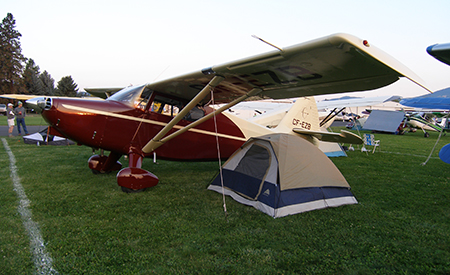 It was early, real early, 5 a.m. on a Sunday in September 2015, and the Oregon sky was still full of stars but showing just a trace of light forming on the mountain tops to the east. The wind had been gusting all night, causing the tent to flap and interrupt my sleep.

A look at the large American flag on the north side of the hangars showed it to be straight out in a steady westerly wind. That meant flying the gorge that morning would be a rough ride. I had planned to leave around 1100, so maybe it would calm down by then.

An hour later, after a shower but no coffee as it was still too early for the breakfast crew, it was daylight and that confirmed what I had feared; the westerly winds had pushed in the marine air from around Portland and had plugged the gorge from near the surface to about 4,000 feet. Okay, I had lots of time to wait for it to clear. Local pilots told me that it should be gone by 1000 or 1100, so I could probably leave then as planned.

Around 1030, the clag in the gorge had dissipated so I called for a weather briefing. Portland was clear and 4,000. The Seattle area to the north was IFR but trending clearer as was most of the Puget Sound area. I figured with an 1100 departure and a fuel stop in Chehalis, my route east of Seattle would be clear by 1300.

At 1110 I was just off Runway 25 into a gusting, 30-degree left cross wind. I made a quick call on Unicom to say thanks for the great weekend and was into the gorge.

It was rough from Hood River to well past Cascade Locks. The g meter bounced between 0 and plus 2, and I could smell fuel spilling from the too-full tanks. Up until that moment, I thought there was no such thing as having too much fuel. At 3,500 feet in the centre of the gorge, the ride smoothed out a bit but the ground speed varied between 69 and 90 mph, indicating gusting head winds of 20 to 41 mph!

Once I was around the corner of the valley and headed north towards Kelso, Washington, it was smooth flying all the way to Chehalis, my planned lunch and fuel stop. Listening out on the Unicom told me that 16 is the active and that I have a Cub ahead of me and a Fairchild 24 behind me in the circuit. I set up on downwind behind the Cub, staying wide to give it time to get down as it is on a full-stop landing. My God, Cubs are slow in the air and even slower on the ground. So I overshot as it was going to be too close for comfort.

The next try got me down after a two-bounce arrival. Hope no one saw that.

Fuel and a quick lunch later, and I was back in the air heading east and noticed that the GPS, my ever faithful Garmin 500, had not started up – no satellites! Who knew? Well it eventually found enough of them to show me that I really was headed the right way. I needed to stay out of Seattle’s Class B air space as, after listening to Seattle approach, I figured that they were way too busy to deal with a VFR Stinson that day. A quick call to Seattle radio opened my flight plan and generated the necessary transponder code for the border crossing.

The visibility and ceilings were good from Chehalis to Thun Field but started to drop by Crest Air Park.

North of Crest around the ridges at Issaquah, it hadn’t cleared quite as I had hoped. Note to self: “Hope is not a plan.” So the further north I went, the lower the clouds were, and my comfortable 3,500 feet of altitude was slowly eroded to a ceiling of about 1,300. Still legal but not as comfortable. A check of the automated weather observing system (AWOS) frequencies at Arlington and Bayview showed 4,000 and 10 miles, so I decided to persevere. Sure enough, I broke out at Snohomish just as predicted. I climbed back up to 3,000 and once past Bayview, dialed in the Abbotsford ATIS.

The wind was favouring 19, but it was closed to landing aircraft as the Air Cadets were using it for glider training. Landings were on 25 with a gusting, 30-degree left cross wind.

As I neared the field I called in for landing expecting 25, as noted, but was told to extend my base leg to the north of the centerline for a Convair on an instrument approach to 07. Hmm, downwind landings … okay for big airplanes, I guess.

So I did as I was asked and then doglegged back to 25 with a caution about turbulence from the Convair. After he departed, I touched down well short of where he had departed, bounced twice again – this was getting to be a habit – then got caught in a gust from the cross wind or turbulence from the Convair or something. I swerved hard right, yoked back with so much pressure on left rudder that my leg hurt for two days, swung equally hard to the left but on one wheel, and rolled the width of the runway. Thank goodness for a 200-foot-wide runway. No harm, no foul.

I cleared customs after a couple of aborted tries at dialing the phone; something to do with shaky hands.

I departed Abbotsford for Langley and again executed my, by now “patented,” two-bounce landing with a complete lack of finesse. However, I did succeed in getting the airplane back in the hangar in a useable state.

Three days before, I had flown the reverse of the trip to the annual Hood River Fly-In at the WAAAM Museum located at the Hood River airport. If you care to look it up, the airport can be found on the Seattle chart. The proper name is the Ken Jernstedt Airfield, and the identifier is 4S2. Hood River is a sleepy little city on the Oregon side of the Columbia River. It is noted for its vineyards, wineries, and, of course, its access to the Columbia River Gorge for the wind surfing.

The museum, then in its eighth year of operation, has hosted a fly-in each fall, providing camping for several hundred fly-in aircraft. In 2015, a record 380 visiting aircraft were on site. While the museum’s focus is on antiques, all are welcome with homebuilts, classics, and warbirds all vying for space on the manicured lawn. The overflow goes to a somewhat less-manicured and dustier area.

On-site meals are provided by local service clubs. The Lion’s Club served a great pancake breakfast each day while the Awards Dinner was catered by the West Side Volunteer Fire Department. Several vendors also catered to pilots and looked after their aviation wants and needs. For the camper’s personal needs on field, showers and portable toilets were provided. If you prefer a more luxurious accommodation than a tent, there are numerous, if somewhat pricey, hotels and B&Bs nearby.

The entertainment on Friday night, following the now-traditional spaghetti dinner, was a well-attended movie projected on the hangar doors. The 2015 movie selection was the eminently forgettable comedy, Those Magnificent Men in their Flying Machines starring Robert Morley. 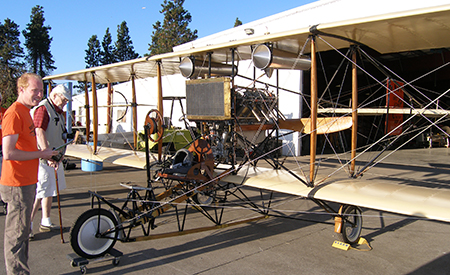 While the museum has some of their hundreds of airworthy aircraft on outside display, each year they feature one recent restoration in the flyby circuit. In 2014 a 1910 Curtis Pusher was in the circuit while 2015 was “The Year of the Waco,” and the highlight was a beautiful red Waco Taperwing that was featured on that year’s poster. The poster bird in 2016 was the Stearman Kaydet. 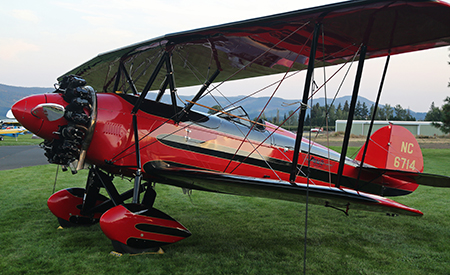 In 2015, there was plenty to keep one amused. There were book signings, gyrocopter and biplane rides, and seminars on fabric work, air traffic control, and pilot medicals, and, of course, touring the museum itself. The largest hangar contains displays of aircraft, cars and trucks of all eras, military vehicles and small arms, and models of all of the above. The complete front wall of Wally Olson’s hangar from the old Evergreen Airport (long a favourite of West Coast antiquers, closed in 2006 after 50 years of operation) has been installed inside as the entrance to one of the many display areas.

On Saturday, the museum team of aircraft judges circulated around the field of 380 aircraft, selecting the winners of various classes to be awarded trophies at the dinner on Saturday night. Biplanes took the majority of the awards, with a Stearman E-75 winning Best Warbird, a Waco INF Best Antique, and another Waco winning Best Biplane, this time a YQC-6. The Grand Champion and the People’s Choice Award went to Ben Scott for his 1930 Stearman Speedmail Jr. 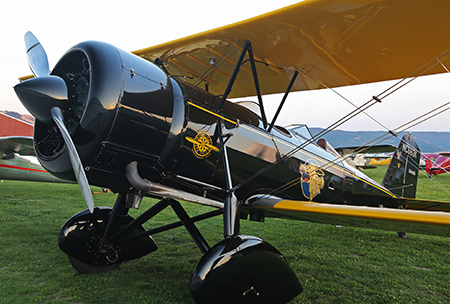 Best Homebuilt went to a Carbon Cub. My personal favourite, a Luscombe 8A won Best Classic. 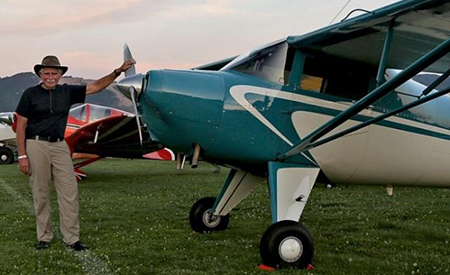 Best Classic – the Luscombe 8A of Angelo Lombardo

This Luscombe is owned by Angelo Lombardo and is based at Fraser Lake Airpark, east of Monterey in central California. This aircraft, purchased by Angelo in 1978 and completely restored in 1990, has been lovingly maintained to show standards ever since.

Throughout the weekend, WAAAM had 130 hardworking volunteers doing all of the usual and necessary tasks to make the fly-in the success that it was. They were parking cars and airplanes, cleaning showers, emptying garbage cans, setting up and tearing down fences, hosting forums, and guiding visitors through the extensive museum facility. Without this dedicated group, it would not have happened. Congratulations and thanks to all who worked so hard. 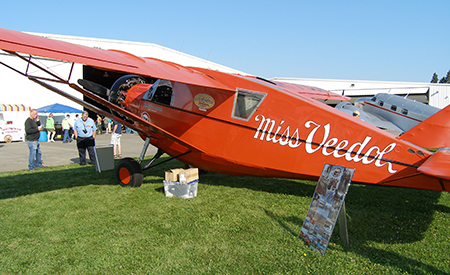 My plan to be back in 2016 was thwarted by family priorities, but maybe we’ll see you there next year? Mark your calendars. The 10th annual 2017 Hood River Fly-In date is September 9 and 10. It is bound to be spectacular. For complete pilot information, check out the WAAWEST COASTAM website.