December 2017 - Saturday, October 28, 2017, turned out to be a perfect day to finally get the new windsock base and viewing bench installed at High River Airport. It was warm and sunny, yet not too hot. Earlier in the week, a group from EAA Chapter 1410 and the High River Airport Authority had agreed on the sock and bench locations. On October 27, the underground searches had been completed, and both areas were cleared for excavation. On Saturday morning, Donavon Bentz, Vance Lucas, Jay Burrows, Ron Best, and I met at 9 a.m. to get the installation kicked off. Caliber Fencing from De Winton was engaged to drill the holes with a Bobcat-mounted auger. This was a big help, as the windsock foundation is five feet deep. Concrete was hand-mixed on site, and within about half an hour, the reinforced concrete foundation was placed, and the pole socket plumbed true. 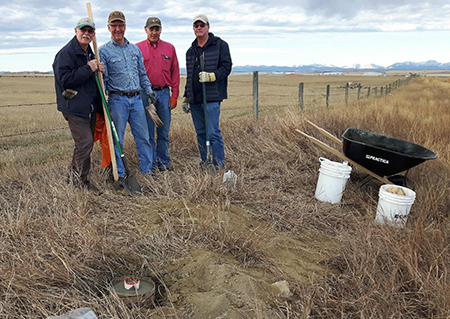 Donavon, Vance, Jay, and Ron admire the placement of eight bags of concrete. 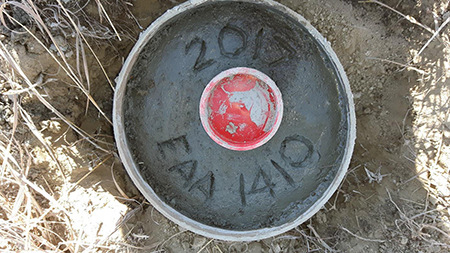 The installed base for the new windsock.

Attention then turned to the bench foundations. The bench was raised to provide good sight lines. This will require the installation of a gravel base around the bench, but that will be done as a later project. The bench is made of recycled plastic and is very heavy. To keep the bench from sinking into the wet concrete, a wood frame was constructed and levelled. Rebar cages were also made up to prevent the concrete around the legs from breaking out over time. After some fiddling  to get the bench properly located, the concrete crew once again kicked into action, mixing 15 bags for the bench foundations. 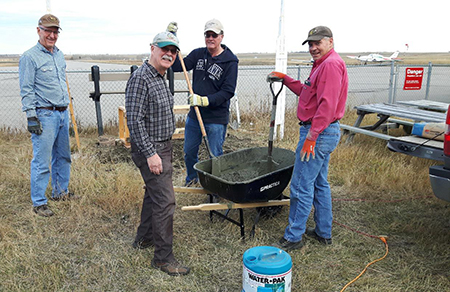 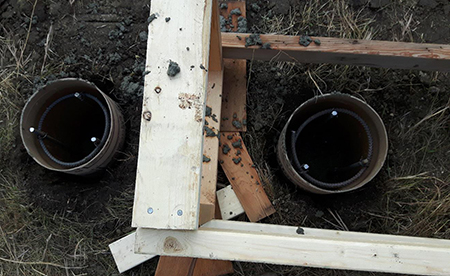 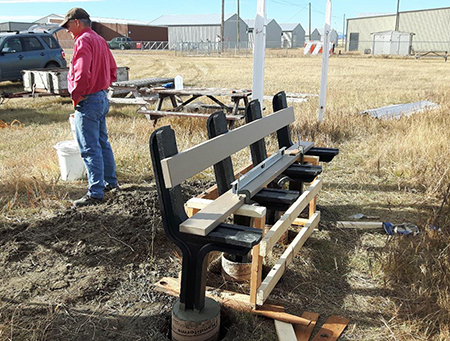 Bench concrete completed. Bench itself still needs the rest of the slats installed.

Placing the concrete was complicated by the framing, bench, and rebar in the way, but the job was completed by about noon. Once the concrete has had time to set and cure, the frame will be removed, the rest of the bench assembled, and the gravel pad installed to make the seat height normal. Also, the windsock foundation needs two weeks to get the concrete strength up to 90 percent, so the sock will go up about mid-November. Thanks to everyone involved in making this job a success!