December 2017 - When it became apparent that my wife and I would be moving from our little farm in Ontario, with its hangars and grass airstrip, to Victoria, British Columbia, I began planning how I would get my two aircraft across the country. We finally decided that I could get my Sonex into the 53-foot moving van, but that I would fly my little homebuilt Zenith CH 750 C-FJNJ. 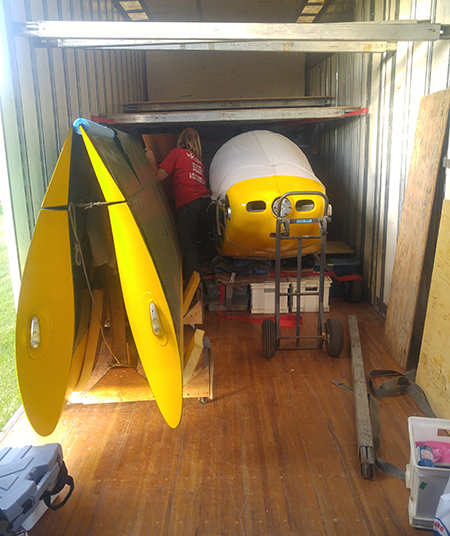 My Sonex loaded into the moving van.

To that end, I began to prepare for that trip. During a visit to Victoria, knowing that my flight would necessitate crossing the Rocky Mountains, I enrolled in a mountain flying ground school at the Victoria Flying Club at Victoria International Airport (CYYJ). I also put a little note on its bulletin board asking if anyone would be willing to give me a short familiarization flight so that I could experience the rather complex (to me, at least) arrival and departure procedures for this small, busy Class C international airport. I got a response from Colin Williamson saying that he had booked a Cessna 172 for a two-hour slot the following Saturday and would be happy to share his time with me! After an evening at his home going over the pertinent frequencies, checkpoints, geography, etc., the ensuing flight with Colin and his wife, Kim, across the Strait of Juan de Fuca to Washington was breathtaking and educational. After circling Mount Baker and doing a bit of valley crawling, the obligatory stop at Chilliwack Airport (CYCW) for pie was the icing on the cake. 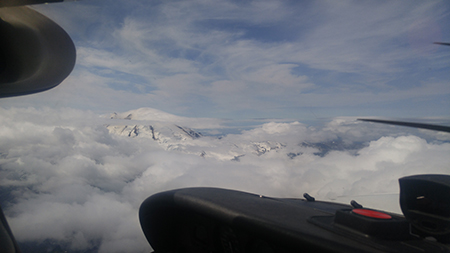 View of Mount Baker from 11,500 feet. The sulfur smell in the cabin attested to its volcano status. 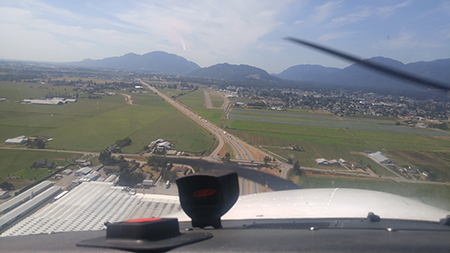 Approach to landing at Chilliwack Airport (CYCW) for pie!

Back in Ontario, having just reinstalled my Jabiru 3300 engine after a complete factory rebuild, (long story, maybe another Bits and Pieces article), I wanted to get some hours on it before striking out across the country. So, I planned a route that would give the engine a bit of a shakedown, and myself a bit of a rust removal as well. 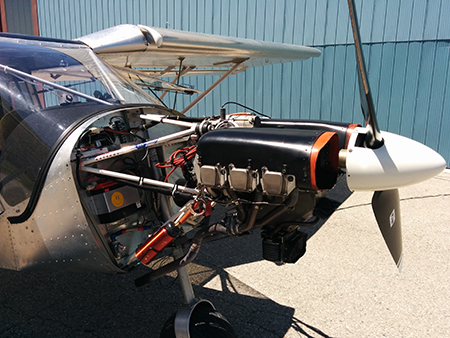 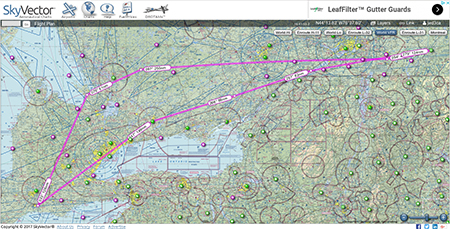 On August 25, I flew two hours north from my base at St. Thomas Municipal Airport (CYQS) in Ontario to visit with my friend Doug Martin at his cottage near Stanhope, Ontario. Doug had agreed to fly right seat with me across to Victoria as he had made previous flights across — one to Nanaimo, British Columbia, and one to the Yukon — I was fortunate that he had the time (not to mention the courage) to accompany me and my little homebuilt on our weeklong trip to lend his expertise. Over the next days at his idyllic cottage, we spent several hours flight planning and entering route information into our ForeFlight electronic flight bag apps.

My next stop was Roland-Désourdy Airport (CZBM) in Bromont, Quebec, the home base of Ian Brown, a name you might recognize as the editor of this fine publication. This 3-1/2-hour flight was largely over some extremely hostile terrain, so my nerves were a bit frayed on landing, but my confidence in the engine rebuild was significantly boosted! Ian and Doug were planning to head east to Prince Edward Island as soon as the weather cooperated. After a day or so, the weather window they required opened up, and they were off — Ian and his fiancée, Joey, in his RV-9A, Doug and his wife, Carrie, in his vintage C-172. I considered flying along, but I decided instead to spend the next week flying around Quebec and Ontario visiting friends I hadn’t seen in a while and would not likely see again for a long time to come.

My newly rebuilt engine was due for its first oil change, so I took advantage of some nice weather to do so. 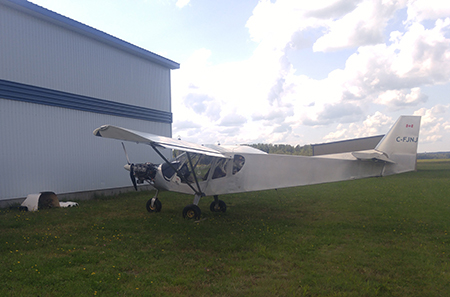 Found a nice spot to change oil and filter at Bromont (CZBM).

The next day I headed east over Mont Brome to visit some friends in the Eastern Townships of Quebec, not far from Lennoxville/Sherbrooke. 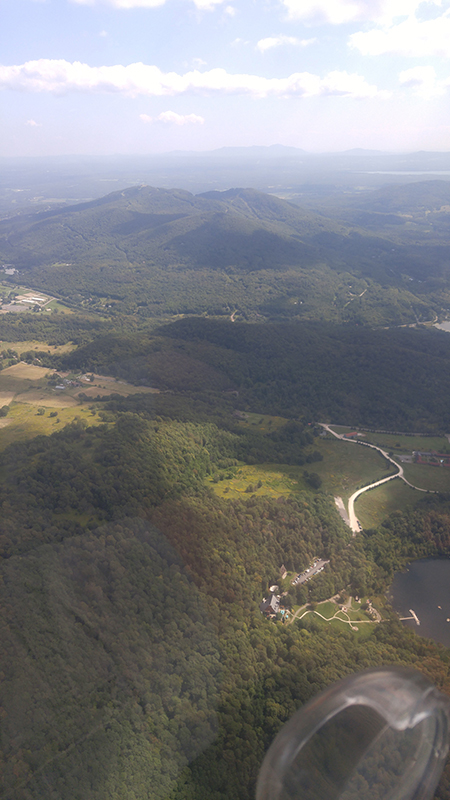 I had not flown into my friend Brian’s grass strip before, and it took me a while to locate it. After landing, I got a tour of Brian’s hangar, including his RatCat and his BMW R100 engine installation into a Kitfox. A bit later that day, I took my friend and photographer Tim Doherty up for a 45-minute flight around Lake Massawippi. 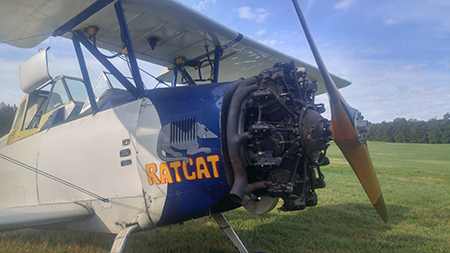 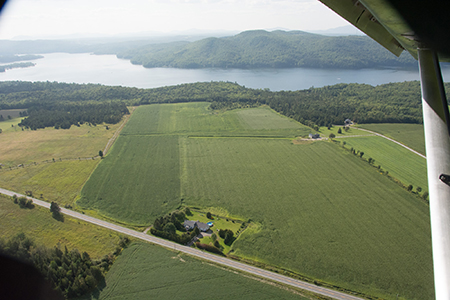 I spent a delightful night at my friends Tim and Dinah’s, and, still enjoying beautiful weather, took off for my next destination: Westport, Ontario. After 1-1/2 hours, I stopped in at Cornwall Regional Airport (CYCC) in Ontario for fuel. 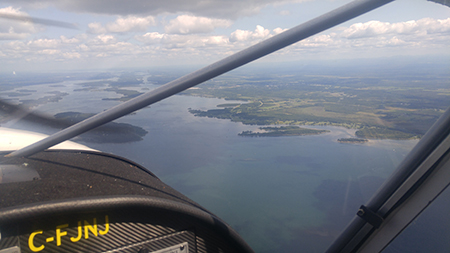 Over the St. Lawrence River near Cornwall, Ontario.

Then I flew another hour to the grass/gravel strip at Westport/Rideau Lakes Airport (CRL2) on the shore of the Rideau Canal near Westport. 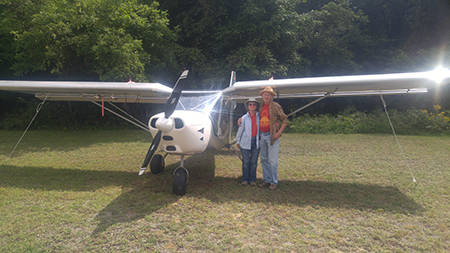 My friends Ian and Louise at Westport.

I stayed with friends in Chaffey’s Lock overnight and took off for Peterborough (CYPQ) the next morning, which is about a 1-1/2-hour flight.

After staying the night with Doug and Linda in their remodelled church near Peterborough, I took Doug up for a local sightseeing flight. He was tickled to fly over his house and appreciated the view from overhead. Then it was off to St. Thomas (CYQS) to finish off the approximately 850 nm loop with a total airtime of about 14 hours. Aside from some radio flakiness (a nagging intermittent issue I solved later), the newly rebuilt engine didn’t miss a beat, and I was definitely feeling more prepared for my cross-country adventure. Stay tuned to next month’s Bits and Pieces for part two, covering the trip from Ontario to British Columbia. In the meantime, blue skies and tailwinds!