See the Rare Nose Art Exhibit at the EAA Museum

December 2015 - At a recent meeting in Oshkosh I had the opportunity to witness the World War II (WWII) nose art on loan from the Commemorative Air Force (CAF). It is going to be there for AirVenture 2016. This is one more reason, as if you needed one, to plan a visit to the museum if you’re going to AirVenture next year.

Unable to display it presently due to its active relocation to Dallas, the CAF has kindly loaned the whole exhibit to the EAA.

As you can read in the history of this collection “Minot Pratt took a fancy to the painted ladies and had his men chop 33 of the nose art panels off the aircraft with fire axes.” Those of you who watch where you’re going when you navigate the Internet will notice the Canadian connection. The in-depth description comes from our own Bomber Command Museum in Nanton, Alberta. Clarence Simonsen, perhaps the greatest documenter of WWII aircraft nose art, grew up in Acme, Alberta, and after the war spent significant energy in writing about it.

The nose art at EAA was acquired by the Commemorative Air Force, which has taken excellent care of it. The artwork was thought by WWII commanders to be good for morale. Many of the pieces contain not only the graphics but also place names or messages, often for the enemy. All of the exhibits have a description placed nearby. 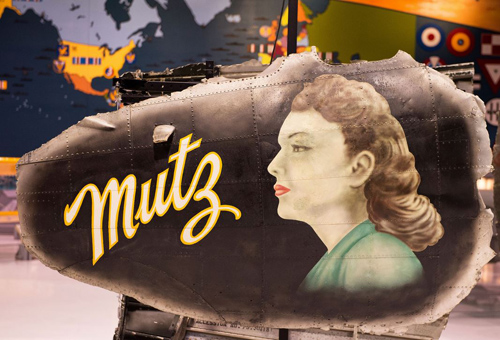 The young men separated from their girlfriends while at war had good reason to identify their aircraft with this folk art, and it really is “art.” Most of the work is very nicely done. Some of it is not considered suitable for young children, and it is tastefully segregated off in an area with a parental warning sign at the entrance, which incidentally also houses an atomic bomb casing, fortunately unused!

The exhibit is scheduled to be on display at the EAA AirVenture Museum throughout 2016.