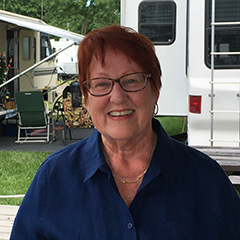 July 21 2018 - Since she began volunteering with EAA in the early 1990s, Jackie Welch has helped grow the EAA Flight Experiences program during EAA AirVenture Oshkosh into a can’t-miss attraction. Jackie, EAA Lifetime 856583, is the 2018 Dorothy Hilbert Award recipient, which is given to a female volunteer who exhibits the passion, dedication, and devotion for volunteerism that Dorothy presented throughout her life and time spent at EAA AirVenture.

“I was shocked. I had no concept at all that I might be considered for this award,” Jackie said. “I’m so honored to be associated with EAA. Volunteering with EAA has been one of the few things in life that’s given me instant gratification.”

Jackie started volunteering with EAA in 1993 and has been instrumental in ramping up and growing the EAA Flight Experiences program for EAA’s Ford Tri-Motors. She’s helped coordinate hundreds of tour stops, led dozens of volunteers, and delivered outstanding customer and member service to thousands of Tri-Motor passengers from coast to coast. Jackie and her husband, Cody, also received EAA’s President’s Award in 2003.

In addition to her Tri-Motor tour work, Jackie has also helped recruit many new volunteers to the program. Her sales pitch is pretty simple.

“I always tell people that volunteering with EAA is fantastic and the greatest experience you can have,” she said. “If you ask most volunteers, that’s what they’ll tell you.”

Jackie will officially receive the Dorothy Hilbert Award July 22, 2018 at 3 p.m. in the Volunteer Park.

“I’m absolutely thrilled and humbled,” she said.” I’ve always felt that being an EAA volunteer is among the highest of honors.”