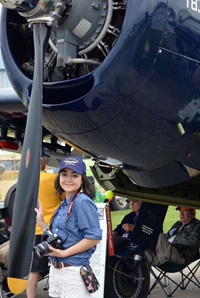 In addition to a trip to AirVenture, which will include lodging and daily admission for Gawthrop, 16, and her parents, she will also receive a Lightspeed Aviation headset and a $7,500 flight training scholarship to start the journey to fulfill her dream of flight.

Sixteen-year-old Gawthrop said she’s excited to learn more about herself, including finding out if she’s capable of “handling an aircraft and really flying,” through flight training.

“It’s a bit surreal, I wasn’t really expecting to have an opportunity to continue my flight training at this age,” Gawthrop said. “I’m just really thankful and I look forward to what lies ahead.”

Gawthrop first fell in love with flight through the Civil Air Patrol’s cadet orientation program in 2013.

“It was then and there, during that moment the wheels gracefully lifted off the runway on that wintry day when I knew aviation was something I could see myself pursuing,” Gawthrop said. “Since then, I have been able to complete additional orientation flights in both powered aircraft and gliders, and have attended a weeklong CAP glider flight academy last summer. I have remained active in the Aerospace Education mission of CAP, and have been able to explore aviation careers in both the military and civilian sectors while working toward my goal of beginning powered flight training.”

Gawthrop plans to pursue a military career and said this opportunity would assist her in accomplishing her goal of serving the country in the Air Force or the Navy.

“I still have a few years of high school left, but I’m hoping to apply to the service academy and pursue [a military career] through college,” Gawthrop said.

Gawthrop said she believes her community service, work, and school experiences have prepared her to take on the responsibility of learning to fly.

“I have prepared myself for this responsibility through choosing to take on new challenges on a daily basis as I continue through this stage of my life,” Gawthrop said. “This new, exciting responsibility is something that I feel prepared for.”

The 2 millionth flight will depart from Boeing Centennial Plaza on Thursday, July 28 at 2:15 p.m.