Fueling Your Airplane at AirVenture 2022

Calling All Volunteers for Young Eagles Needs at AirVenture 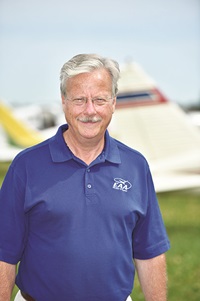 July 24, 2016 - In anticipation of Monday’s official opening of EAA AirVenture Oshkosh 2016, EAA CEO & Chairman Jack J. Pelton offered a preview of the coming week’s highlights, shortly after making a brief stop on the flightline to watch early arrivals. “They’re coming in one after the other!” Pelton announced in the AirVenture Today office, as the kickoff countdown continued.

The massive Martin Mars water bomber, “one of the truly unique” aircraft here this year, will conduct water-bombing demonstrations during the daily airshow, Pelton noted, while the Snowbirds Canadian Forces 431 Air Demonstration Squadron makes its first visit to Oshkosh since 1983. “They put on a beautiful demonstration,” Pelton recalled of that performance – “tight formations, and a lot of airplanes.”

New this year, a tribute to World War I aircraft features a half dozen vintage and replica aircraft, which will fly in the mornings and evenings. “People can get up close when they’re starting,” Pelton said. “The engines burn castor oil— it’s a completely different sound and smell.”

Boeing is celebrating its centennial year here at Oshkosh, and on the appropriately renamed Boeing Centennial Plaza, will display some of its historic aircraft, including the EAA’s own B-17 Aluminum Overcast, as well as FIFI, the B-29 bomber; and Alaska Airlines’ newest B-737, and a Cathay Pacific B-747 cargo freighter.

During Wednesday’s Tribute to Pearl Harbor at Boeing Centennial Plaza, EAA will “recreate a feeling what it might have been like” on a peaceful Sunday that suddenly erupted in the explosive destruction wrought by Japan’s aerial attack. The tribute will feature aircraft that were at Pearl Harbor on that day, including a Curtiss P-40 Warhawk, and an Interstate Cadet trainer that was in the midst of a flying lesson when the attack occurred. You can see the Interstate Cadet, nicknamed The Pearl, performing in Wednesday evening’s air show and find out more in the July issue of Sport Aviation magazine.

The Home of Innovation

The presentation of the first Founders Innovation Award on Tuesday night speaks to the EAA’s “core mission,” Pelton said. “The EAA has been focused on innovation since its inception.” The $25,000 cash prize will go to one of five finalists who are developing a new method of preventing loss of control, in-flight (LOC-I) accidents, which the NTSB has identified as a safety priority. “We’re taking our resources and channeling [the NTSB’s] efforts to see if we can come up with the solution.”

Aviation Gateway Park is celebrating a new permanent home this year, just west of Boeing Centennial Plaza. Dedicated to education and innovation, here collegiate aviation programs are highlighted, as are new technologies from electric airplanes to UAVs, along with small companies demonstrating the technologies of tomorrow.

Also getting a makeover this year, adjacent to Aviation Gateway Park, is the Four Corners, aka the Compass Rose, where the Pilot Proficiency Center now anchors one of the corner spots. The PPC will have more than a dozen Redbird simulators each staffed by a certified flight instructor (volunteers from NAFI and SAFE), where attendees can experience scenario-based training to “help brush up pilot skills,” from basic stick and rudder flying to practicing instrument approaches, as the EAA has “taken on a strategic initiative to encourage other methods of staying proficient besides flying an airplane,” Pelton said. “With seasons and cost hurdles, we don’t get as many hours (of flying) as we’d like to see. The emphasis is to create a training curriculum to keep people engaged year round.”

Meanwhile, throughout the week, Theater In The Woods features a lineup of fascinating speakers, while forums and workshops provide “the opportunity to not only learn, but gain hands-on aircraft building experience, one of the things that makes this unique compared to any other air show in the world.” Full information at EAA.org/schedule.

Younger attendees will also enjoy KidVenture, as do adults (Pelton calls it “one of my favorites”), which attracts some 20,000 youngsters annually for hands-on aviation experience ranging from bucking rivets on an aircraft to flying radio-control model airplanes at Pioneer Field.

Meanwhile, during the past year, the EAA has spearheaded several important efforts on behalf of members and the aviation community, including the just-expanded STC to enable non-TSO’d glass panels to be installed in certified general aviation aircraft, and now third-class medical exam reform. Pelton said more boundary breaking news will be announced here at the show.

Pelton said he’s looking forward to his own favorite AirVenture activity: “For me, the week is really about getting together with my aviation friends that I don’t see the rest of the year,”. Reflecting on the camaraderie all AirVenture attendees feel here at Oshkosh, Pelton wondered aloud what would happen “If we could bottle this, and roll it out to the rest of the country.”

As for the crowd that arrived this weekend and watched the site come to life, Pelton said, “We’re thrilled to have people come early and enjoy the set up. It helps create momentum.”