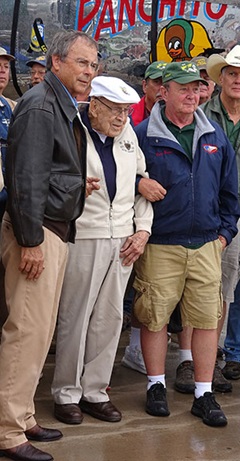 July 26, 2017 -  Blustery rain could not deter a standing-room only crowd of about 750 from listening to a presentation by the last of Doolittle’s raiders, Lt. Col. Richard E. Cole, Wednesday morning in the Warbirds in Review area. When the rains hit before Cole’s remarks, he and moderator David Hartman, along with two of Jimmy Doolittle’s grandchildren, were relocated inside the new Warbirds in Review Quonset hut, and Cole’s interview was shown on a huge television screen outside.

Cole was a B-25 copilot when he volunteered for what was only described as a “dangerous mission,” he said. When the crews relocated with B-25 bombers to Eglin Field, Florida, they were only told they would be trained to take off from an aircraft carrier. “All the Army pilots didn’t believe it,” Cole said. “I have to admit I was one of them.”

The men didn’t know their target would be Japan. “The scuttlebutt was that we were … going to go to Africa,” he said. Cole said they had been at sea from San Francisco aboard the USS Hornet for two days when the ship’s public address system came to life: “Now hear this! Now hear this! This force is bound for Tokyo.” The men were initially jubilant, he said, then became quiet. “People began to wonder, ‘What have I gotten myself into?’”

The 16 B-25 bombers crowded onto the deck of the Hornet were modified with extra bladder gas tanks to extend their range. Additionally, each bomber carried 10 5-gallon gas cans to add to the tanks en route, according to Cole. The cans were to be holed and tossed overboard to sink, to prevent them from becoming floating markers that could lead others back to the Hornet.

The raid was planned to launch from the Hornet within 400-500 miles of Japan, but detection by a Japanese picket boat hastened the raiders’ departure while they were still 750 miles away. Suddenly, an already-critical fuel supply situation became perilous. “What could you do about it?” Cole asked. The B-25s could not afford to burn gas circling the Hornet to form up, so each bomber departed on a solo flight over the Pacific, to the enemy heartland.

The Doolittle bomber with Cole was tasked to drop incendiary bombs on northwest Tokyo. To make the drop, Doolittle climbed to 1,500 feet, where ineffective flak was encountered. Then it was back down on the deck, departing at 200 feet, Cole told the crowd.

Pressing on to China, Cole and his crew could not locate their intended airstrip in the dark, stormy night. Gas low, the men bailed out at about 8,500 feet over China. Doolittle was last to leave the B-25. Cole was determined to get a good parachute deployment. “I pulled the rip cord so hard, I gave myself a black eye,” he said, gesturing with his hand.

Cole came down in a pine tree. He sat on a limb until daylight provided some visibility before walking west, via compass heading, as all the men had been instructed. Cole and the rest of the crew were reunited by the Chinese. He said Jimmy Doolittle was initially concerned and wondered if he would be court-martialed for the outcome of the mission. Instead, Doolittle was awarded the Medal of Honor, which he reluctantly accepted, saying it was for all of the Raiders.

In this 75th anniversary year of that pivotal raid, Dick Cole is 101 years old. He retold this story in a disarmingly modest way and was warmly received and cheered by his large audience.