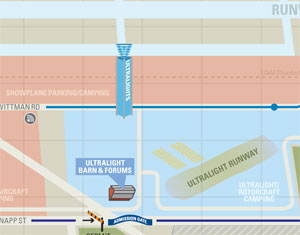 The Fun Fly Zone is home to ultralights, light planes, powered parachutes and trikes, hot-air balloons, homebuilt rotorcraft, and light-sport aircraft (LSA). The area is best known for its grass runway, where you can get up close to the many daily aircraft operations, including morning and evening ultralight flying, homebuilt rotorcraft flights, as well as Twilight Flight Fest several evenings per week.

At 8 p.m. the Twilight Flight Fest begins, including the nighttime 3-D RC airplanes and 3-D RC helicopters. Due to the popularity of Twilight Flight Fest, food and beverages will now be available in that area. As in the past EAA’s STOL Invitational will kick off the evening festivities, with a number of highly-modified bush aircraft showing off their impressive capabilities. The evening program will also include the powered paragliding Paradigm Aerobatic Team, the Patriot Parachute Team, and Red Bull Air Force skydivers.

Check out the featured ultralights, light-sport aircraft, and homebuilt rotorcraft scheduled to appear. See the unique ultralights, light-sport aircraft, and homebuilt rotorcraft in action from this grass runway. Resource spot for all the information you need on the ultralight and LSA community during AirVenture. Learn more about EAA’s ultralight community and how you can get started. Learn more about the light sport-aircraft community and how you can get started.